Broadcasters Can Make a Major Contribution to Reducing Climate Change

The transmission of radio signals requires the use of electricity. A lot of this electricity results in a lot of harmful CO2 emitted from power stations.

Medium Frequency (MW) Amplitude Modulated (AM) broadcasting started in the 1920s and transmits a constant carrier as shown below which is characterised by significant loss of energy. 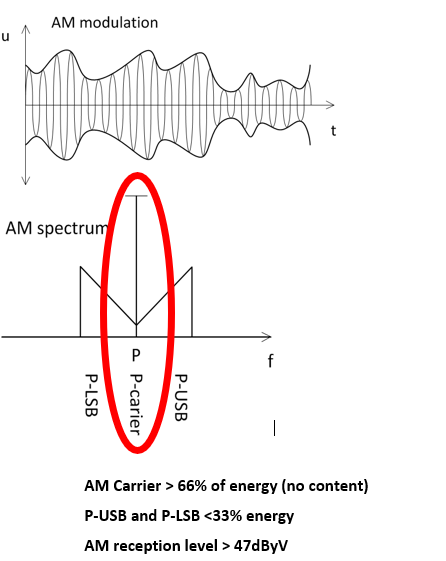 Modern semiconductor MF AM transmitters consume 1.22 times more electricity than the rated output power. This does not include the cooling of higher power transmitters and other opex costs.

High Frequency (Short Wave) AM broadcasting emerged after MF AM. It consumes 1.389 times the electricity of the rated output. This band can cover from regions to whole continents and can be used for domestic or international coverage. Fading, distortion and noise can also be a problem.

Very High Frequency Modulated (FM) in stereo started in 1961 and can cover a city or, if radiated from a high tower at high power, even a region.

Each of the above analogue broadcasting systems can only carry one program per transmitter.

Ultra and Super High Frequencies are used by mobile internet. The Telco’s business model is based on monetising each service. High speed 5G uses the 27 GHz band and higher, which requires repeaters 900m apart, which gives a coverage area of 2.5 km². Slower 5G and older generations use around 1GHz which can cover around 300 km². So, this requires huge numbers of air-conditioned base stations to cover regions without black spots while using lots of electricity. Some of the electricity is anyway lost on the long power lines.

The newest option is to use Digital Radio Mondiale for all frequency bands above and below 30 MHz: LW, SW, MW and VHF bands I, II-FM and III. 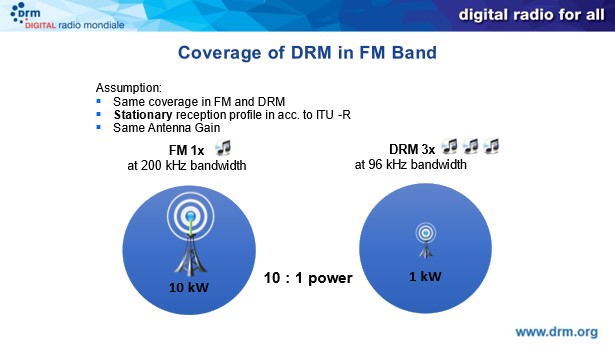 The environment Government department or electricity supplier in each country or region can give you the coefficient required to convert the electrical energy used in a year to the number of tonnes of CO2 produced in a year. This coefficient will be near zero for hydro power, rising significantly for brown coal fired power stations.

DRM broadcasting overcomes the AM reception problems, giving clear stereo sound and data. It can provide continuous decoded signals to the equivalent of unlistenable AM listening.

It should be remembered that most transmitters are operated nearly continuously, whereas receivers are only operated when the listener wants to. However, DRM receivers have a standby mode to decode just enough data to detect an Emergency Warning Message, which will wake the receiver, select the warning message, emit a warning signal to wake the listener and then announce the warning loudly. Also, it will switch on the screen so that a map of the disaster and any detailed instructions can be viewed.

Since the telcos switch off their oldest technology every 8 years, after 60 years of FM stereo and 100 years for AM, isn’t it time broadcast radio went DRM with the most energy efficient distribution system to compete with the digital being used by the telcos, which produces more carbon dioxide as does AM and FM.

To check the energy savings and compare analogue and digital you might find the recently published DRM energy efficiency calculator very useful: https://www.drm.org/energy-efficiency-calculator/