Under the banner “Digital Radio Mondiale Drives Forward”, the 2018 General Assembly of the DRM Consortium took place on Tuesday 17th and Wednesday 18th of April, at the Palma Bellver Bay Meliá Hotel on Mallorca hosted by Bosch and RFmondial.

The General Assembly set the strategy and working plan for the next year for DRM. This year’s Assembly also elected the Chair and the main bodies of this not-for-profit organisation.  The only additions to the existing Steering Board are Nautel and RRI (Indonesian public broadcaster).   The other Board members are: Ampegon, BBC, Babcock International, Fraunhofer IIS, NXP, RFmondial and Thomson Broadcast.  Thomson Broadcast also joined the Executive Board and Ruxandra Obreja was re-elected Chair of the Consortium.  Alexander Zink (Fraunhofer IIS) and Matthias Stoll (Ampegon) were also re-elected as Vice-Chairs and Lindsay Cornell (BBC) re-elected as Chair of the Technical Committee.

The busy and friendly meeting was an excellent opportunity for members and guests from Asia, Africa and Europe to review all the activities of the past year, receive updates from country representatives and specialists from all the corners of the globe on an outstanding year of progress for DRM.   On both days they enjoyed direct live transmissions in DRM shortwave from the UK and Bulgaria on receivers like Avion, Gospell and Titus SDR.  A special receiver session was held before the conclusion of this successful event.

For Ruxandra Obreja, DRM Chairman, this was a moment to take stock “and review the excellent progress made by DRM in India and other countries in the Asia-Pacific region, as well as South Africa, other countries in Africa, Middle East and Europe and in the automotive industry. DRM as a flexible and economical provider of audio and extra benefits like emergency warning functionality is now in a unique position to give users a powerful, all-band solution for local, regional, national and international coverage. The General Assembly gave everyone  a reason to be proud but also to step up  the efforts of getting DRM transmissions and receivers in the market.” 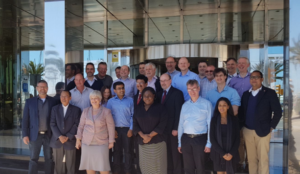