This year’s annual General Assembly of the Asia-Pacific Broadcasting Union was excellently hosted by the Indonesian public broadcaster, RRI, in Bali, one of the 17,000 islands of the Indonesian archipelago. The paradise island favoured by tourists became the main meeting and talking point around the theme “Media for the Future”.

Just before the start of the General Assembly a focus group meeting on DRM was organised by RRI. The key stakeholders in the radio digitisation gathered to hear about and debate the great benefits of the technology for Indonesia, as well as the challenges of bringing it to adoption. Mr. M Rohanudin, President Director of RRI, representatives of the Ministry of Information, of commercial broadcasters and the industry took on board the points made by DRM Chairman and Vice-Chairman, Ruxandra Obreja and Alex Zink. Indonesian participants also gave a picture of the complex Indonesian radio market. They also showed full understanding of the importance of introducing exciting content alongside the new technology. As one of the Indonesian participants put it: “DRM is queen but content is king”.  The interest and push for DRM was palpable but more work is needed. 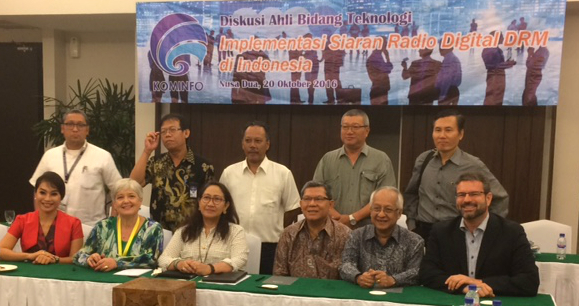 RRI and DRM Experts at the Focus group meeting

Ahead of the focus group meeting a lot of work had gone on at the Denpasar medium wave transmission of RRI to prepare it for a DRM transmission run for almost 24 hours from October 20-24. The digitisation of the GatesAir analogue transmitter took only 3 hours and this was possible because of the help of RRI director of technology and new media, Mr. Rahadian Gingging, as well as of his team, and of Alex Zink and of Fraunhofer IIs and of other Consortium companies like Transradio, and RFmondial. The DRM broadcasts featured special messages for the ABU participants, presentations on RRI, DRM the emergency warning functionality, music, as well as the Journaline service accompanying the audio, allowing listeners to look-up the latest news on demand, free-to-air, on their receiver screens and in multiple languages simultaneously.  This specially produced material for the General Assembly of the ABU could also be received in DRM in a car driving around Nusa Dua, the part of Bali where the ABU meeting was held.

DRM featured not only with its medium wave and shortwave transmissions but also with short, well-illustrated presentations in the radio working group (by Radu Obreja, DRM Marketing Director) and in the technical committee (Ruxandra Obreja, Alex Zink and Lindsay Cornell). At the beginning of the technical committee, Mr Frederik Ndolu, member of the Supervisory Board of RRI, made the point about the importance of technology, to future proof public broadcasting. He gave a serious nod in the direction of DRM.

During the two-day technical committee, the reference to the Indonesian DRM demo trials, the Indian roll out and the serious interest in DRM in countries like Pakistan and Vietnam were all very well received. But the one thing that was different this year for DRM at the annual GA of the ABU was the link between presentation slides and the physical receivers on display outside the conference hall. The new receivers, like the Chinese “Gospell radio” and the “Titus II” (the first software defined radio suitable for all analogue bands and DRM AM but to include soon DRM+ and other digital standards), caught the imagination of the participants who came and heard digital radio. Thanks to a small semi-professional RFmondial receiver they could get the same multi-media audio and text content on their own mobiles. This paves the way for a smaller version which could allow car analogue receivers to get full digital content.

The “Titus II” SDR radio was shown and demonstrated to the ABU Secretary General , presidents of ASBU (Arab states’ broadcasting union), ABU (African broadcasting union), presidents and key officials from India, Pakistan, Afghanistan, Iran, Saudi Arabia, Turkey, South Korea (picture) and so many more. As ABU Director of Technology and Innovation, Dr. Amal Punchihewa, said to us, the radio broadcast community has been waiting for a multi-standard, multi-platform solution for some time and this is now ready to fly. I suppose this is called “actual” media for the future.