DRM Is Part of the BBC World Service Story

07 May DRM Is Part of the BBC World Service Story

Posted at 06:59h in News by DRM Project Office 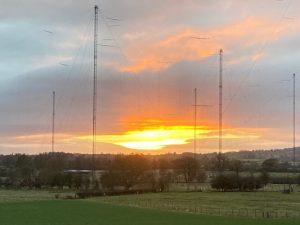 Our old friend James Careless studiously ignores DRM once more in his well-researched, but to our minds incomplete article “BBC World Service Turns 90” in the March 30 issue.

As an ex-BBC senior manager, I would like to complete the story now that the hectic NAB Show is over.

Having lived through and experienced at close quarters the decision to reduce the BBC shortwave about 20 years ago, I can confirm that the BBC World Service decision to cut back on its shortwave footprint — especially in North America, where reliable, easy-to-receive daily broadcasts ceased — has generated much listener unhappiness over the years.

In hindsight, the decision was probably right, especially in view of the many rebroadcasting deals with public FM and medium-wave stations in the U.S. (and later other parts of the world like Africa and Europe) that would carry news and programs of interest to the wide public.

But BBC World Service in its long history never underestimated the great advantages of shortwave: wide coverage, excellent audio in some important and populous key BBC markets (like Nigeria) and the anonymity of shortwave, an essential attribute in countries with undemocratic regimes.

A tool for today

Shortwave listening received a boost recently when broadcasters rapidly reinstated shortwave broadcasts to provide information and support to dislocated people and those eager to access uncensored external information in Ukraine and Russia.

The BBC World Service ended its shortwave broadcasts to Eastern Europe in 2008, but in 2022 after the banning of its popular Russian-language websites and the persecution of journalists in Russia, the BBC quickly increased transmissions of the BBC World Service via shortwave radio to four hours per day to ensure that people in affected parts of Russia and Ukraine can access its news service.

The U.K. government has just allocated an additional £4 million pounds (€4.2 million) funding for the BBC World Service to provide such services.

Shortwave never disappeared in most of the world. However, in Europe, with its dense population and excellent infrastructure, the technique is considered power-hungry and unnecessary in times of peace and stability.

Even so, BBC World Service, as one of the developers and users of the only open, all-band digital broadcasting technology Digital Radio Mondiale (DRM), is still broadcasting in DRM shortwave to Europe (for short times daily) and is testing DRM from Cyprus, as we speak, though in medium-wave.

Dr. Simon Keens, sales and business development manager at Ampegon Power Electronics AG of Switzerland, a supplier of shortwave transmitters, believes this perception of “tech from the past,” particularly shortwave, may have obscured the great advantages of modern shortwave.

“Since shortwave transmissions can propagate over intercontinental distances, broadcasters with minimal infrastructure can be remote from a practically infinite number of receivers in undefined locations,” he said.

He also sees increased interest in shortwave and its digital potential: “Current shortwave transmitters are not limited to the distorted, crackly broadcasts of the past: All our transmitters are factory-fitted for Digital Radio Mondiale. DRM shortwave gives broadcasters the possibility to broadcast crystal-clear FM quality stereo sound, and even deliver images and videos simultaneously. This can provide enormous benefits when broadcasting to displaced people or populations under censorship.”

BBC World Service has been interested and supportive of the DRM standard for over 20 years. It maintains shortwave transmissions from Middle East and the UK or Africa using the services of Encompass Media Services. It has done the most complete and very successful DRM for FM trial in Edinburgh. It has trialed DRM medium-wave form Cyprus and continues its daily DRM shortwave transmissions to Europe and Asia.

Within the DRM consortium, as one of its key members, and pursuing separately its own strategy, the BBC World Service is also trying to stimulate the thinking about how to make the advantages of digital radio DRM (not only good audio, but also data with applications for distance learning or emergency warning) available to parts of the world that need relatively simple, cheap, maybe solar-powered, receivers.

The solutions are within grasp and there are digital shortwave receivers available. Today, analog receivers are still plentiful, as are digital SDR solutions — the currently affordable phone and tablet dongles provide other ways of receiving shortwave in both analog and DRM. And technology already exists for affordable DRM receivers: Manufacturers are simply awaiting bulk orders.

After 90 years the BBC has proven its resilience and success by weaving the new IP technologies with the simple and effective ones that have new digital clothes and can offer so much more than analog at a fraction of the energy costs.

This artice was originally published at radioworld.com.