Posted at 13:52h in Uncategorized by DRM Project Office

This year’s SET (Television Engineering Society) congress and EXPO 2014 took place in the last week of August in São Paulo.This is the Brazilian media’s biggest event, attended by over 300 companies and more than 100,000 people. Highlights from the event can be seen here.

More than 50 panel discussions debated the hot topics of the hour, and included two radio panels: Radio and audio quality moderated by Marco Túlio from Globo Radio System; and AM to FM migration moderated by Eduardo Cappia from AESP. 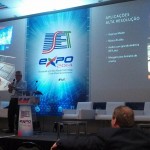 The Brazilian government has authorized all AM stations to migrate to the FM band. For the low power “local” stations (1kw), migration is compulsory, otherwise they will be required to increase their transmission power and become “regional” stations (more than 5kw). The intention is to reduce local AM transmissions. But for now, migration is possible only in places where there are free frequencies in the FM spectrum. Elsewhere, it will only be possible when analogue TV is switched off and the 78-87 MHz spectrum space becomes available. The probable date for analogue TV switch off is 2017, and the main Brazilian cities like São Paulo, Rio, Brasília, Belo Horizonte and Porto Alegre will have to wait till then.

The migration process has three initial phases (not taking into account the equipment changes required afterwards): spectrum availability; documentation and taxes; and payment, by the station, of the new FM licence. Stations can withdraw from the process at any point. The spectrum canalization study has been finished in one Brazilian state, Rio Grande do Norte, where there is space in the actual FM spectrum. Only eight stations have reached the documentation and taxes stage, and they are now waiting for the Ministry of Communications to set the FM licence value.

At SET, the Ministry representative said that licence values will be announced at the end of October. Brazil has 1,784 licensed AM stations; 78% have registered initial interest, but first statistics from Rio Grande do Norte indicate that only 30% might reach the third phase of the process – and the price of the new FM licences may affect how many stations finally migrate.

AESP, São Paulo’s Broadcasters’ Association, is preparing transmission tests in the “extended FM band” (78-87 Hz), the likely band for migration of AM stations. A transmitter and antenna are being set up (on 84.7 MHz) in São Paulo. The antenna is a Brazilian prototype and no transmitter has been sourced yet. The intention is to test this frequency in full digital in the near future, and AESP have asked for the DRM Consortium’s support.

The DRM Consortium is delighted to be supporting the transitions, which may offer a chance to digitise radio at the same time. 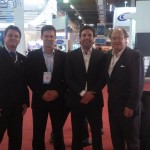