The DRM Consortium, in collaboration with BECIL, hosted a high-level round table meeting in New Delhi on January 31st. The aim of the event was to update and stimulate the interest of key Indian stakeholders in the public phase launch of the project to digitise radio in India, following the successful installation of 35 DRM digital radio transmitters by All India Radio (AIR).

The event was inaugurated by the Honourable Shri M Venkaiah Naidu, Indian Minister for Information & Broadcasting, who congratulated All India Radio and Prasar Bharati on the successful completion of the first phase of the DRM project.  “AIR has re-invented itself through its digital transmitters based on the International ITU standard Digital Radio Mondiale, fulfilling the vision of ‘digital India’ laid out by the Prime Minister”. Looking to the future, he went on to say that: “…this is the time for all stakeholders in India to work together – from public and private Broadcasters to radio and automotive manufacturers to retailers – to make digital radio in India a big national success for the benefit of all Indians, and to turn it into a beacon project.”

The Minister acknowledged that FM was an established analogue technology in India, but he emphasised the need to extend the benefits of the DRM digital radio standard to the FM band. All India Radio announced the next two phases of the DRM project, which will utilise all features and benefits of DRM, allowing for the eventual move from simulcast to pure digital.

All those present enjoyed the various receiver demonstrations and listened to a live DRM broadcast on the latest in-car receiver presented by Hyundai. 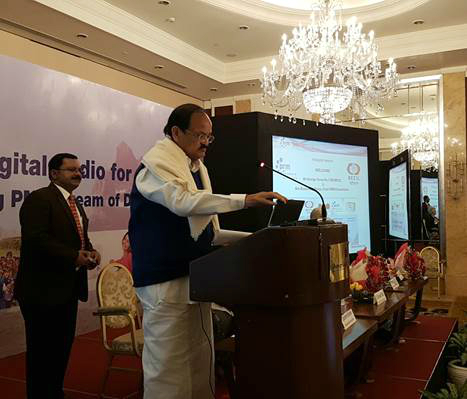