Once again, DRM featured prominently at the National Association of Shortwave Broadcasters annual meeting held at Trans World Radio headquarters in Cary, North Carolina on the 9th and 10th of May. Not only was DRM the topic addressed by four of the speakers, but there were many other sessions related to DRM topics and developments.

A challenge came from Lauren Libby (president of Trans World Radio) for the broadcasters and attendees to create a “Receiver Work-group” to brainstorm a way to jump start within this group low-cost receiver development. This challenge was met head-on by the NASB board and a new workgroup was set up. It will start work by the end of May.

The conference featured a spirited presentation and Q&A by Johannes von Weyssenhoff of StarWaves. Johannes proposed that with the correct commitment, he could begin immediate production of receivers and modules at extremely competitive prices. George Ross of TWR presented the vast world of low-cost SDR units being deployed globally by hobbyists in pursuit of DRM reception. Along with his colleague Mike Sabin, the two discussed the interest they had seen in Japanese and Chinese enthusiasts confirming reception of KTWR DRM tests broadcast from Guam last Christmas.

Jerome Hirigoyen of TDF (Telediffusion de France) presented a novel project called DRMcast Receiver. This device serves as a gateway whereby DRM is received and decoded and the audio is sent via WiFi to any available smartphone, PC or tablet device through a simple web interface. The unit itself has the antenna and power connections. This low-cost alternative to a conventional radio could serve multiple mobile devices in the vicinity.

Christopher Rumbaugh of DRMNA.info blog presented some of the DRM Consortium achievements over the last year and a report on radio enthusiasts he met with on a recent trip to Japan. He reported that Japanese radio hobbyists and specialists enjoy radio in both digital and analogue forms and welcome further broadcasts and tests in DRM as well as using other broadcasting initiatives such as Radiogram. 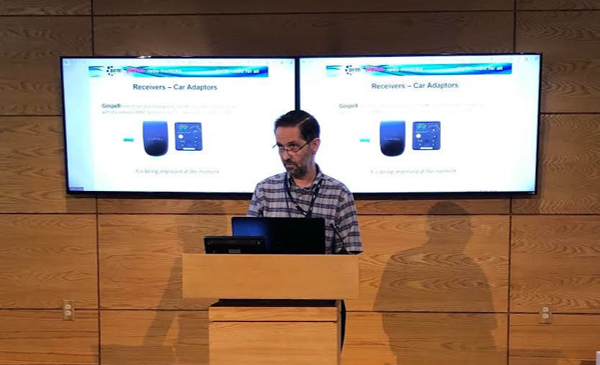