Posted at 14:36h in News by DRM Project Office

The recent events in Ukraine, with its tragedy of human casualties, extensive destruction or disruption of local broadcasting infrastructure, and new levels of censorship of the internet and journalism have brought shortwave broadcasts sharply back into focus, even though, they never stopped — the British Broadcasting Corp. alone has 40 million shortwave listeners worldwide.

Shortwave listening received a boost recently when broadcasters rapidly reinstated shortwave broadcasts to provide information and support to dislocated people and those eager to access uncensored external information in Ukraine and Russia.

The BBC World Service ended its shortwave broadcasts to Eastern Europe in 2008, after 76 years of broadcasting. In 2022 after the banning of its popular Russian language websites and the persecution of journalists in Russia, the BBC quickly increased transmissions of the BBC World Service via shortwave radio to four hours per day to ensure that people in affected parts of Russia and Ukraine can access its news service. BBC director-general Tim Davie said, “In a conflict where disinformation and propaganda are rife, there is a clear need for factual and independent news people can trust.” This is clearly the view of the UK Government, which just allocated an additional 4 million pounds (4.2 million euros) funding for the BBC World Service to provide such services. Referring to the funding, UK Culture Secretary, Nadine Dorries, commented, “The BBC will ensure that audiences in the region can continue to access independent news reporting in the face of systemic propaganda from a dictator waging war on European soil.” 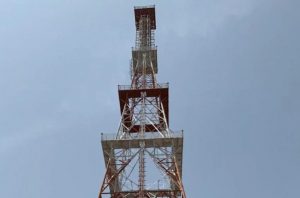 Re-emerging from the background

These challenging times have prompted a re-examination of a technology widely seen as a relic of the Cold War in Europe and overdue for replacement in favor of the ubiquitous mobiles, digital FM, and internet radio. Despite all this, shortwave has turned up once again as the only reliable option on planners’ desks; maybe the same planners who made the transmission cutbacks asked of major broadcasters such as the BBC World Service, Deutsche Welle, Radio Australia and other broadcasters.

Some have abandoned shortwave completely, while others, like Radio France International and Radio Exterior de Espagna), have reduced their transmissions significantly. A few have maintained a full schedule of shortwave transmissions, notably All India Radio and Radio Romania International.

“There’s still a lot to listen to,” said Jeff White, general manager of WRMI [Radio Miami International]. As chairman of the High Frequency Coordination Conference, White supports the grassroots crowdfunding campaign Shortwaves for Freedom, which has just announced additional shortwave radio broadcasts to Russia, Belarus, Ukraine and other parts of Eastern Europe. According to Shortwaves for Freedom, reception of the initial WRMI broadcasts, with content from Voice of America and Radio Free Europe/Radio Liberty, have reached the targeted countries via the station’s 100,000-watt transmitters.

Shortwave never disappeared in most of the world. However, in Europe, with its dense population and excellent infrastructure, the technique is considered power-hungry and unnecessary in times of peace and stability.

Dr. Simon Keens, sales and business development manager at Ampegon Power Electronics AG of Switzerland, a supplier of shortwave transmitters, believes this “tech from the past” image may have obscured the great advantages of modern shortwave. “Since shortwave transmissions can propagate over intercontinental distances, broadcasters with minimal infrastructure can be remote from a practically infinite number of receivers in undefined locations,” He said:

“Current shortwave transmitters are not limited to the distorted, crackly broadcasts of the past: All our transmitters are factory-fitted for Digital Radio Mondiale: the only digitization technique developed for shortwave. DRM shortwave gives broadcasters the possibility to broadcast crystal-clear FM quality stereo sound, and even deliver images and videos simultaneously. This can provide enormous benefits when broadcasting to displaced people or populations under censorship. When the Cold War ended, we didn’t just sit on our laurels. Ampegon is currently working on upgrading transmitters delivered decades ago to modern standards specifically to facilitate DRM.”

So, while many see shortwave as “uncool”, it’s just because it’s relatively simple and robust.  Simplicity is the unique selling point of the technology. Shortwave is simpler than comparable digital TV or new telecom-based services. In either analog or digital mode, shortwave works across long distances since it uses low frequency radio waves that reflect from the upper atmosphere to deliver services beyond the horizon. New or upgraded digital transmitters can deliver either audio, data or a mix of multi-language content. Most importantly, shortwave broadcasts are also free-to-air, one-to-many, and listeners are untraceable. The signal can come from another country or continent, remote from zones of conflict or emergency, unlike TV or mobile signals, which are much more local. And since shortwave transmissions use low frequencies, the signal propagates through buildings and other obstacles much better than higher frequencies, thereby reaching into homes and basements.

With the new backdrop of censorship, the anonymity of shortwave consumers is also back in focus. Shortwave listeners leave no trace or record of their accessing services, unlike when mobile or computer users access the internet. The internet can become overloaded, maliciously manipulated, and is subject to DDoS and similar attacks by states or individuals. Internet access requires a lot of infrastructure, much of which is potentially monitored or controlled by oppressive governments or unknown individuals. Radio carries none of these risks: only the broadcaster is identifiable.

For somebody to interfere with, or “jam,” a radio transmission, they need to broadcast a greater signal strength on the same frequency as the unwanted station. With FM and mobile phone signals, this is easy to achieve, given that they require relatively low power transmitters near users. With shortwave, however, the enormous broadcast footprints mean that it is much more difficult to jam broadcasts over the entire area, increasing the likelihood that broadcasts are received successfully.

So, if shortwave is so simple and difficult to jam, why has it faded away over the past 20 years? The answer is complex, but three decades of peace essentially meant that it was no longer considered effective. Also, without investing in the necessary DRM upgrades to transmitters with an uncertain future, shortwave could not provide the same high quality and low cost as newer technologies. You can hear an example here. In addition, the standard allows also for the transmitter power to be reduced considerable (40-80%)

Today, analog receivers are still plentiful, as are digital SDR solutions — the currently affordable phone and tablet dongles provide other ways of receiving shortwave in both analog and DRM. And technology already exists for affordable DRM receivers: manufacturers are simply awaiting bulk orders.

If one of the many unforeseen results of the current crisis in Ukraine is to encourage a focus on shortwave, let us not forget that what seems like an old technology is just a simpler technology. Digital shortwave broadcasting exists, is already deployed and is increasing in reach. But the job is not yet done. It needs to be further supported and rolled out. Receivers are the key and must be made widely available with both digital and analog modes. There will be a cost, but this is surely negligible compared to the human and material costs of a terrible war. If the current resurgence demonstrates anything, it is that simplicity and reliability can provide channels that serve more people, more readily, than complex, modern and expensive alternatives.