The Digital Radio Mondiale Consortium is delighted to announce that the recipients of the 2017 DRM Enterprise Award (Africa), has been jointly awarded to Dr Roelf Petersen on behalf of Radio Pulpit (member of the Pulpit Media Group) and Broadcom International, Thembeka Khaka (Thembeka Khaka and Associates) and Johannes von Weyssenhoff.

The award aims to stimulate interest in the DRM standard in various parts of the world that would benefit from the full introduction of digital radio. Radio Pulpit 657AM (member of the Pulpit Media Group) and Broadcom International, involved in the trial of DRM in mediumwave trial, made history by leading the South African radio broadcasting industry into the digital era with the first LIVE digital medium wave broadcast and, thereafter, the first medium wave broadcast trial in Southern Africa.

The other two winners, Thembeka Khaka and Johannes von Weyssenhoff actively contributed and supported a DRM Trial in the VHF Band II for local coverage (DRM+) currently on air, working with Westbury Community Development Centre (WECODEC) serving the disadvantaged communities around the Westbury, Sophiatown and surrounding areas near Johannesburg.

Ruxandra Obreja, DRM Consortium Chair, congratulated the winners: “This is a well-deserved win and good news for Africa and all those involved; the winners have shown dedication, enthusiasm and great support for DRM in South Africa. Through their great passion and dedication DRM could be heard and enjoyed in Africa where digital radio could contribute to education, information, involvement and bettering of so many lives”.

The next DRM Enterprise Award 2018 will be awarded to an individual or team in South East Asia.  To qualify for the award an individual needs to be nominated by two credible endorsers aware and ready to testify about the good work of the nominee.

For more information on the award, to get updates on the next award, please write to:  projectoffice@drm.org.

Dr Rudolf Petersen, MBA, Dcom and Dip in Industrial relations – Managing Director, Pulpit Media Group
Dr Petersen has 50 years in management specialising in Strategy Management in Media & Military Industry. He spent 4 years in the Middle East (Israel and Jordan) “My life’s purpose and assignment is to take the Gospel to every home in SA and further into Africa through the modern media.”

Thembeka Khaka, is a social entrepreneur/ activist who is passionate about bridging the digital divide in marginalized communities.  Her focus is strategy, policy, key stakeholder engagement, advisory, and implementation of projects in the ICT sector, having been an active participant in ICT Sector also. “I would like to thank the DRM Consortium, the community that I serve, my advisors and supporters, my family most dear my children.”

Johannes von Weyssenhoff, Johannes is a broadcast technology specialist and engineer with focus on digital transmission and receivers. Coming from an IT background, he became interested in DRM in 2001 and joined the German DRM Platform in 2003 after presenting his first self-developed DRM receiver at IFA in Berlin. In 2006, he launched the STARWAVES Carbox – the world’s first DRM capable automotive multistandard receiver – as well as the DRM home receiver W37 before he moved to South Africa as a technology consultant for the state broadcaster SABC. Since 2015 Johannes is working with WECODEC, an NGO based in Johannesburg that also operates a community radio station and has launched Africa’s first VHF DRM trial in the congested FM-Band of Johannesburg and also developed a proof-of-concept DRM receiver for South Africa. 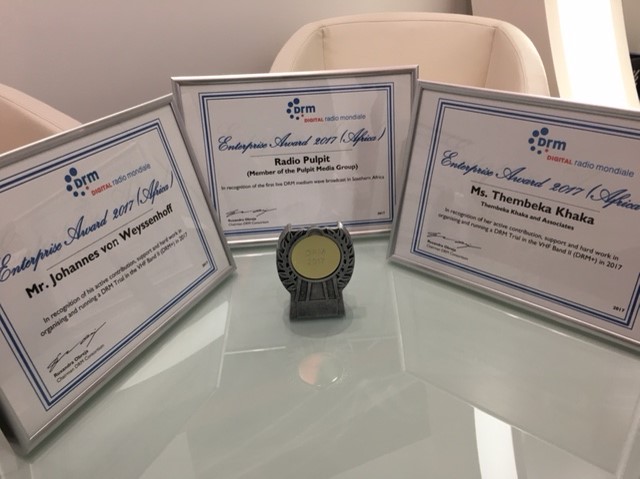