Thoughts on Shortwave’s Heritage and Future

26 May Thoughts on Shortwave’s Heritage and Future

Posted at 09:03h in News by Guido Leisker

This article orginally published on radioworld.com.

Seldom have we seen so much passion and polarizing views as in the recent articles for and against shortwave. From “it’s dead and gone” to “this is the revival,” all shades of opinion concerning this simple and all-encompassing platform have been expressed vigorously.

Shortwave Has a Pedigree

Shortwave, currently used for large-area, regional and international coverage in the developing world, certainly registered a decline in the past two decades (but it never died, as you can see here). This loss of pre-eminence in the developed world after the Cold War is not surprising. The platforms available nowadays, in the so called “global village,” include “basic” internet connections (browsing, emails, messaging apps of any type), to the prolific social media products (Facebook, Instagram, Twitter, Reddit), as well as video, radio and TV apps, satellites, mobiles give the impression that the whole world is truly connected!

At least this is the view from Washington, London, or Berlin. But there are the same proportion of people in Europe and America with everyday internet access as there are in Africa with no way to access to it. In such regions, shortwave and mediumwave radio remains essential for many, one of only a few reliable means to receive communication.

Since the arrival of AM and FM some seventy years ago, the invention of at least three largely recognized digital broadcasting systems (DRM, DAB/DAB+ and HD) is the most notable radio development. Digital Radio Mondiale — the DRM open-source global standard — is the latest and most advanced of the three systems, but the only one that can digitize radio in all frequency bands and the only digital option for shortwave.

Closing shortwave transmitters and then trying to restart them presents a huge time, effort and financial challenge. However, nowadays, broadcasters can often buy shortwave transmission hours, in digital, too, from third party distributors, and do not necessarily need to rebuild a comprehensive infrastructure.

Since its invention in 1998 DRM has been amply demonstrated all over the world. DRM demonstrations are taking place all the time. Last year, trials were completed in India, Brazil and Russia, and are currently underway in Australia (AM and FM) and Denmark (FM). The standard DRM features are shared across all the frequency bands.

Although many broadcasters have reduced their shortwave transmissions, some have opted for DRM to continue in shortwave. The quality of these broadcasts is exceptional, affording FM-like quality over large areas.

The DRM Consortium is aware of the following regular DRM shortwave transmissions: Ceske Telekomunikacie, B.U.T.E, Funklust bitXpress, Radio France International, BBC World Service, Radio Romania International, Radio Kuwait, WINB, All India Radio and soon Pakistan. Voice of Nigeria has DRM capability and has been broadcasting in DRM. There’s Radio Marti in the USA (WMLK is currently being upgraded). Radio New Zealand has a limited schedule, as they only now have one and not two transmitters. Trans World Radio (KTWR), China National Radio, Radio Purga, and even Pyongyang Broadcasting Station. Various other stations can be heard broadcasting in DRM, sometimes at significant power, but their owners are unknown, since there is no requirement for licenses to implement DRM broadcasts.

Not all broadcasters or countries the DRM Consortium cooperates with have current digital shortwave capabilities, though they have tested and installed DRM transmitters for other frequency bands (in FM, Indonesia – SW DRM testing is planned). Others have mandated digital sound broadcasting DRM for AM (mediumwave) and FM, and DAB+ for band III (South African government policy since April 2021).

The number of shortwave broadcasts has recently increased as the tragic events in Ukraine and Russia have reminded us of how internet can be simply shut down and FM towers fall victim to bombardment and power blackouts.

Radio Miami International have announced additional shortwave radio broadcasts on its 100,000-watt transmitter to Russia, Belarus, Ukraine, and other parts of Eastern Europe (with content from Voice of America and Radio Free Europe/Radio Liberty). The BBC World Service also resumed four-hour daily broadcasts in shortwave to ensure that people in many parts of Ukraine and Russia can access its news service. BBC World Service has about 40 language services and up to 25 million shortwave listeners in Africa alone (as officially reported). Radio Vatican also added Ukrainian language services to its broadcasts. 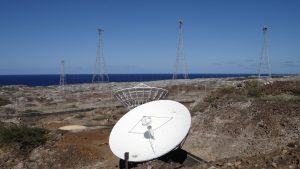 Ascension Island shortwave station in the Atlantic Ocean run by Encompass media for BBC broadcasts to Africa. The site has also been used for DRM tests. (Photo via DRM)

So is USAGM, as already mentioned in a RW article: “USAGM is in the middle of a multi-million-dollar expansion of shortwave capability at one of its facilities at this very moment. In the past decade, no USG shortwave stations have been shut down, except for one that was beyond economical repair due to severe storm damage.”

Old Transmitters in Analog or New Digital Ones?

Today all modern shortwave transmitters are incorporating all the functionalities of the Digital Radio Mondiale standard. They are “DRM-ready.” In the past 12 months inquiries about adding DRM capabilities to new or old transmitters (as only transmitters built after 2000 can be upgraded to DRM) has increased, in some cases, up to 50%, according to Ampegon, one such shortwave transmitter manufacturer based in Switzerland.

Simon Keens, Sales and Business Development Manager at Ampegon believes this “tech from the past” image, generally labelling analog shortwave, may have obscured the great advantages of modern shortwave. He states: ‘digital shortwave is no longer a power-hungry transmission method. It is modern and efficient. Gone are the crackling sound and fading. Broadcasters have the possibility to broadcast crystal-clear FM quality stereo sound on more audio channels and complement the sound with images and videos at the same time in a dedicated channel. This can provide enormous benefits to displaced people or populations under censorship or other emergencies.’

We get daily reports of excellent DRM shortwave broadcasts sent from Romania and received as far as Brazil, or from India and received in Dubai, or even further afield, as this Australian listener testifies: “I have listened to the BBC World Service from Singapore. The broadcasts are aimed at India. I listened to a Kiwi SDR 4000 km away in the opposite direction and it never missed a beat, for an hour a day for weeks”.

This is 21st century digital shortwave delivering perfect audio. The greatest drawback of analog SW has been eliminated. The other great benefit is the significant energy savings offered by a DRM shortwave transmitter which can be openly demonstrated using the DRM tool, based upon manufacturers’ test data.

Though analog shortwave is mostly associated with international broadcasters, there are many countries still using it for their domestic audiences, too (Peru, India, Africa, China). Brazil continues to cover its Amazon region with analog shortwave signals. The recent DRM test was completed successfully: it did not “stall” but was finished and the test results are available. The current tender for new SW transmitters specifies DRM capability.

Therefore, every time the DRM consortium hear that shortwave is “old hat” and that even the Ukrainians and Russians need 21st technology such as VPN or Tor, not shortwave, let us stress that DRM digital radio is also a 21st century platform. It fits in a diverse media landscape with more players and more interests than ever before.

Where Are the DRM Receivers?

This remains a valid question. There are fewer DRM receivers out there than those of other digital standards. There are also fewer than those sitting on shop shelves or in homes. But DRM receivers are already abundant in cars. In only five years, more than 4.5 million Indian cars manufactured by great brands, from Maruti-Suzuki to Toyota and Mercedes-Benz, have been sold with DRM receivers! There are SDR solutions and mobile applications. There are some very good standalone or pocket receivers, like those manufactured in China (though currently more difficult to get hold of because of COVID). There are also other developments. We are most excited about the very low-cost (we are close to the magic figures of $10-20 dollars), innovative DRM chipset, and receiver devised in the UK by Cambridge Consultants and CML Microelectronics. 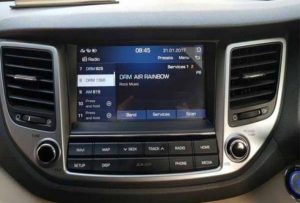 The DRM receivers feature both analog and DRM in most or all bands. Still, receivers do not get pollinated by bees. People will not buy them without more DRM transmissions. What is needed then? Extensive communication about broadcasts, consumer demand and manufacturers available to produce receivers in large quantities. But while some broadcasters deny DRM as feasible because there are no receivers, no-one will order receivers in quantity while there are no broadcasts. However, there is huge potential for enormous profit for the first people to close the circle. The DRM Consortium can encourage all our excellent members, and the industry in general, but it cannot manufacture receivers itself or order them in industrial quantities on behalf of broadcasters.

Our conclusions broadly mirror the following statement from an independent Irish broadcasting consultant: “There can be no direct replacement for Shortwave as the first line of international broadcasting, especially for most of Africa, some regions in Asia, the Pacific and South America and worldwide in case of political or religious instability, regional or widespread conflict and calamities.”

For the DRM Consortium, the shortwave glass is half full as there is nothing really to replace shortwave, even with its limitations, in many parts of the world.

We are also realistic and see DRM shortwave as one of the important options and valuable complements in the media’s deck of cards. Shortwave also needs affordable digital receivers and they are coming, so do not write off shortwave yet.