The Digital Radio Mondiale is a digital radio standard that has been designed by broadcasters, for broadcasters, with the active assistance and participation of both transmitter and receiver manufacturers and other interested parties (such as regulatory bodies).  It has been designed specifically as a high quality digital replacement for current analogue radio broadcasting in the AM and FM/VHF bands; as such it can be operated with the same channelling and spectrum allocations as currently employed.  An overview of the frequency-bands where DRM operates is shown in Fig. 1 below. 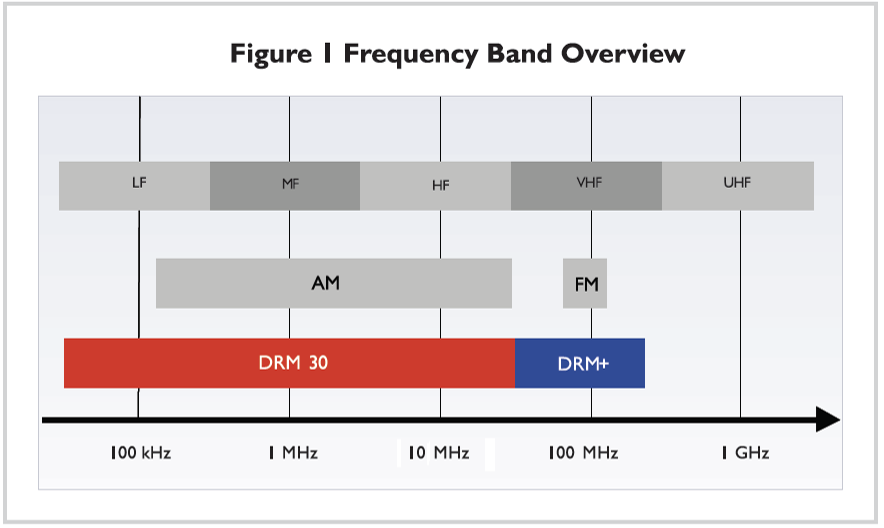 The DRM standard describes a number of different operating modes, which may be broadly split into two groups as follows:

DRM has received the necessary recommendations from the ITU, hence providing the international regulatory support for transmissions to take place.  The main DRM standard has been published by ETSI.  In addition, ETSI publishes the entire range of current DRM technical standards.

Apart from the ability to fit in with existing spectrum requirements, the DRM system also benefits from being an open system[1].  All manufacturers and interested parties have free access to the complete technical standards, and are able to design and manufacture equipment on an equitable basis.

This has proved to be an important mechanism for ensuring the timely introduction of new systems to the market and for accelerating the rate at which equipment prices reduce.

This is a significant consideration for broadcasters investing in DRM infrastructure, manufacturers’ investing in receiver development and production, and even more for the listeners who will need to invest in the new DRM-capable receivers.

[1] An open system or standard is one in which a complete system description is openly published with sufficient technical detail to allow a manufacturer to implement the whole or part of the broadcast chain.

The DRM broadcasting system is specifically designed to allow the new digital transmissions to co-exist with the current analogue broadcasts, and a significant amount of work has been undertaken to quantify the operating parameters that assure mutual analogue and digital compatibility.  Hence the changeover from analogue to digital broadcasting can be phased over a period of time, which in turn allows existing broadcasters to spread the required investment to meet any budgetary constraints.  Furthermore, unlike some other digital systems, the DRM system has been designed to allow suitable analogue transmitters to be modified to switch easily between digital and analogue broadcasts.  This can significantly reduce the initial investment cost for a broadcaster.  An additional budgetary benefit is the reduction of transmission energy costs.

DRM exploits the unique propagation properties of the AM bands. The introduction of DRM30 services allows a broadcaster to provide listeners with significantly improved audio quality and service reliability.  As a result, international broadcasters can provide services on SW and MW that are comparable to local FM services, whilst enhancing the listener experience with easier tuning and added data services.  National and local LF and MF broadcasters will derive similar benefits.

In the VHF bands, DRM+ can be configured to use less spectrum than current stereo FM broadcasts, whilst additionally deriving the potential benefits of increased robustness, reduced transmission power, increased coverage or additional services.

DRM is unique in providing an extensive and extremely powerful ‘toolkit’ array of operating modes and techniques, which allow a broadcaster to tailor the system to best meet the needs of his or her particular market.  For instance, DRM allows the independent selection of modulation parameters (code-rates, constellation, guard-intervals etc.) to enable an optimum trade-off between capacity and signal robustness.  DRM also supports both multi- and single-frequency network operation, (MFN/SFN), and hand-over to other frequencies and even other networks (AFS – Automatic Frequency Checking & Switching).  This latter feature allows a broadcaster operating on several different platforms to hand a listener from DRM to AM, FM or DAB and back again.  The appropriate signalling is intrinsically supported by DRM and DAB, and by data carriers on AM and FM (AMSS and RDS respectively).

Of particular note amongst the various data services is the DRM Electronic Programme Guide (EPG), which allows listeners with appropriate receivers to access the broadcast schedule and set recording times accordingly, and Journaline  – accompanying audio programmes with interactive textual information, like news, or graphics.

DRM can alert the widest possible audiences in case of pending disasters through its built-in Emergency Warning Functionality (EWF), allowing to serve as a last resort when all local infrastructure is down by covering the affected area with radio signals from outside. In case of an emergency, DRM receivers are ordered to switch to and present the emergency programme, and may even be able to turn on automatically. The emergency programme combines on-screen signalling, audio content, DRM text messages, and may include Journaline text with detailed look-up information in multiple languages in parallel.

DRM is being operated at power levels ranging from a few watts on 26 MHz through to several hundred kilowatts on long-wave.  It is possible to utilise the one technical standard to provide coverage ranging from international, national (c.1000 km), and all the way down to local community radio (c.1 km radius).

The DRM Consortium (Digital Radio Mondiale) is an international not-for-profit organisation composed of broadcasters, network providers, transmitter and receiver manufacturers, universities, broadcasting unions and research Institutes. Its aim is to support and spread a digital broadcasting system suitable for use in all the frequency bands up to and including VHF Band III. There are currently over 100 members and supporters from 39 countries active within the Consortium.

DRM was formed in Guangzhou, China in 1997, initially with the objective of “digitising” the AM broadcast bands up to 30MHz (long, medium and short-wave). The DRM System Specification for broadcasting below 30MHz (”DRM30”) was first published by ETSI in 2001.

Subsequently, a number of ancillary supporting standards were issued, including a Distribution and Communication Protocol. In 2005 a decision was taken to extend the DRM system to incorporate modes designed to operate in the VHF broadcasting bands. This required the addition of high-frequency modes, which, following refinement through laboratory testing and field-trials, resulted in the publication of the (extended) DRM specification ES 201 980 V4.1.1.