Posted at 13:35h in News by DRM Project Office 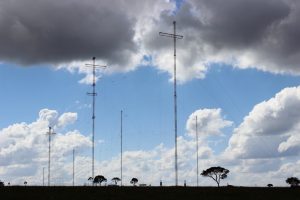 DRM broadcasts from a locally produced transmitter will be originated for the first time in Latin America, as Brazil will officially start digital (DRM) shortwave transmissions through The National Radio of the Amazon towards the vast area of the northern Amazon region, mainly inhabited by indigenous populations.

In another first, Empresa Brasil de Comunicação (EBC), the public broadcaster, placed the order for the high-powered transmitter with a local manufacturer, the BT Transmitters company from Porto Alegre. BT Transmitters signed a contract with EBC for the production of a 100 kW transmitter in the DRM digital system.

The equipment will be used on the 11,780 kHz frequency in the 25-meter band, which is one of the shortwave channels used by Rádio Nacional da Amazônia since 1977.

The purchase for R$3.5 million is the result of an auction held in August 2020, in which other equipment for EBC’s public radio broadcasts is planned to be acquired.

At the end of last year, Nacional da Amazônia carried out tests with the DRM technology using a transmitter of 2.5 kW with the digital power of just 1 kW.  EBC demonstrated then, for the first time in the country, the use of multi-programming and the transmission of interactive multimedia applications.

Despite this low power of the transmitter supplied by BT Transmitters, recordings were reported from different regions of the country and even from North America and Europe (Radiolab – Começam transmissões de rádio digital DRM em onda curta no Brasil).

The results of the tests were published last month by the DRM Consortium.

The DRM (Digital Radio Mondiale) standard provides power savings of up to 80% in electricity consumption, a sound quality equal or superior to FM, as well as allowing images and other data to be sent to the radio receiver.

DRM is a worldwide consortium, and more information can be found at www.drm.org.