At IBC on Friday 12th September the DRM Consortium launched the first DRM AM model receiver produced in India for India and for global use.

The AV-DR -1401 designed and produced by Communications Systems Inc under the brand name Avion Electronics of India (www.avionelectronics.in) is a digital DRM SW, MW, as well as analogue AM and FM receiver with stereo reception, offering some of the extra features that make digital superior to analogue: more choice in perfect sound (MPEG audio), multimedia applications and local interactive text and media (Journaline), automatic tuning by station, not frequency, emergency alert capability etc.

The receiver was unveiled at the first DRM ‘Pit-stop’ on Friday 12th September at the Ampegon stand (Hall 8:D35). It was subsequently showcased on Saturday 13th September at Thomson Broadcast, the second ‘Pit stop’ event (Hall 8:C35) and  at the “tell and show” event organised by DRM Consortium member Nautel Ltd (Hall 8:C49). At their session ‘Building to a Billion and Beyond’, Nautel representatives and other Consortium companies from India and around the world gave an update on the digital project in India and participants could sample the excellent sound of the new DRM receiver model.

Ankit Agrawal, Director of Communications Systems Inc which produced the new model was thrilled with the interest created by the DRM radio: ”Our receiver performed very well and its audio quality, extra features and ease of use received a lot of positive feedback.  IBC participants particularly liked the extended battery life of the receiver and its emergency warning capability.  With small adjustments we plan to make the receiver available for order in the next few months.”

Ruxandra Obreja, the Consortium Chairman, says that: “We are very pleased with the exciting announcement on this new Indian receiver. With sufficient orders and support it could do very well and start the receiver ball rolling demonstrating that global, green and extremely cost-effective DRM is not just the future of digital radio but a reality for listeners now.” 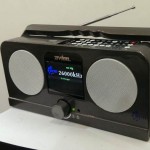