On June 1st the capital of Hungary, Budapest, started being covered by DRM signals in shortwave. This is the culmination of a long technological development of radio broadcasting in Hungary, which started already in the early 1890s.

The DRM standard had just been ITU recommended in 2004 when the Communications Authority of Hungary, in co-operation with the Department of Broadband Infocommunications Systems of the Budapest University of Technology, began to monitor DRM broadcasts in the traditional AM bands. This service, though now operated jointly by the Authority and an external company called SZOMEL Kft., is still live and available here.

The next important milestone was in 2008 when Antenna Hungária, Hungary’s national broadcasting company, transmitted the programme of the Hungarian Catholic Radio using the DRM standard on medium wave for a month.

A significant decision taken also by Antenna Hungária was the installation of a new, state-of-the-art two megawatt high power AM (medium wave) transmitter purchased from Nautel in 2017. It is also DRM capable and for a few days during its installation DRM was on air again in Hungary with an unprecedented transmission power. Its signal reached as far as Malaysia.

The Budapest University of Technology joined the DRM effort in 2015. “As specialists dealing with various broadcasting standards, we are enthusiastic about the opportunities of DRM and we wanted to join the professional activity of the DRM Consortium” ― explains Csaba Szombathy, head of the broadcasting laboratory which started a 1-year DRM broadcast on 1 June 2019.

The current short wave DRM transmission performed from the university has two main objectives: partly to demonstrate the value-added possibilities of DRM (xHE-AAC coding, slideshows and Journaline advanced text services accompanying the audio content), and partly to provide an opportunity for receiver manufacturers to test their products in real life. Since this is not a public or commercial service, the modulation parameters (transmission mode, SDC and MSC constellations, interleaving depth, etc.) can be freely changed at any time. Developers are, therefore, welcome to perform field tests with their devices in Budapest working in close co-operation with the broadcasting team of the Department of Broadband Infocommunications Systems and Electromagnetic Theory of the Budapest University of Technology. The landscape of the Hungarian capital is particularly interesting because the town is partly built on a flat area, partly on hills. The two sides are separated by the river Danube and are exhibiting various interesting wave propagation phenomena.

The transmitted content is a 24-hour program, played out in a loop, compiled by the media partner of the project, Radio Maria. Initially, AAC coding is used, but the intention is to migrate to the most advanced xHE-AAC codec and to add Journaline along with a slideshow. The Fraunhofer Institute in Erlangen, Germany, provides substantial support for this upgrade.

The technical parameters of the demonstration broadcast in Budapest, Hungary, are as follows: 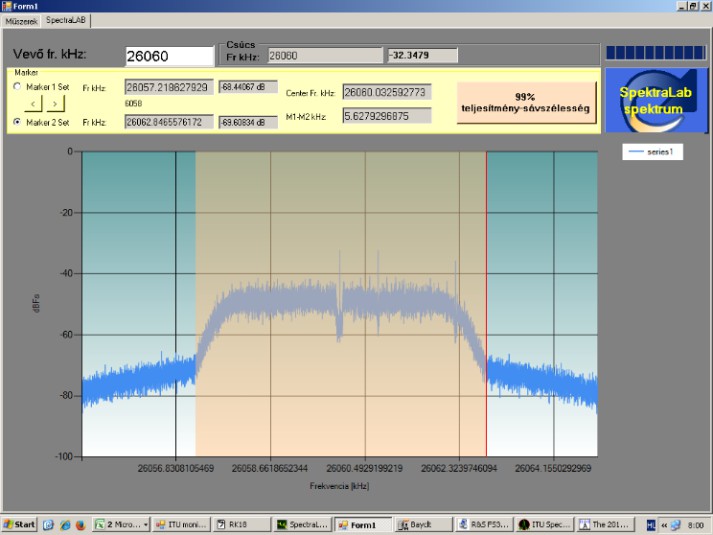 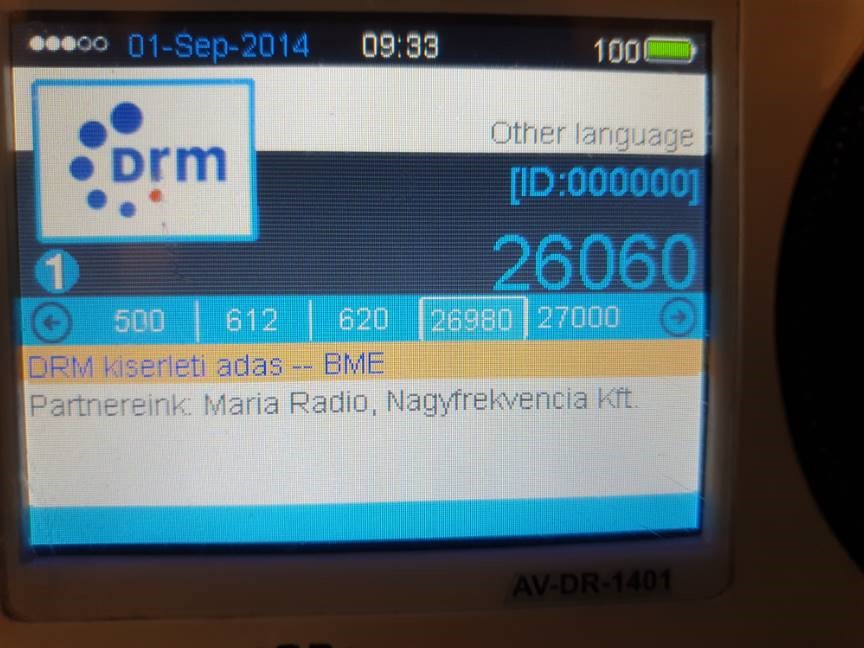 The demonstrational transmission on the display of an Avion portable receiver 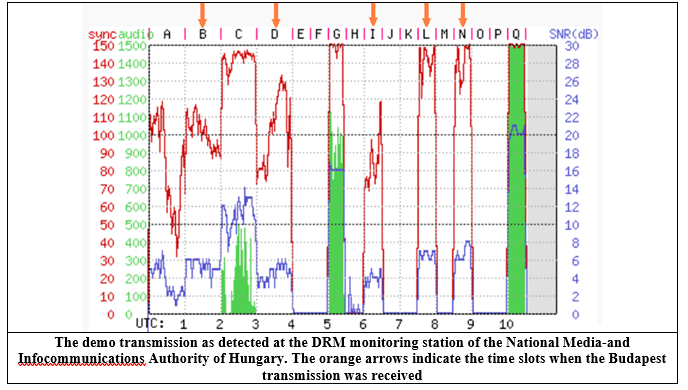 Also, DRM monitoring data of the Hungarian Communications Authority,  is available on these related websites below: